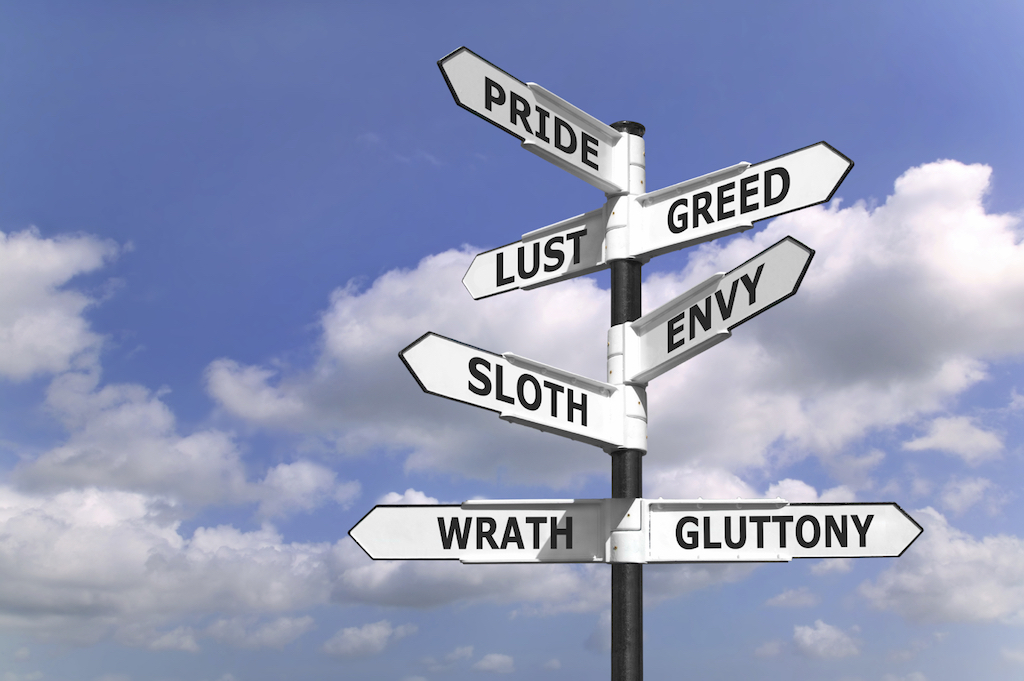 If you were seated at a restaurant, given a menu, placed your order and then were told, “All the food here has poison in it,” would you say, “That’s fine. I’ve heard the steak here is excellent”? One would hope not. You’d likely grab your coat and run. Yet, every day, we choose poison for our souls.

Lust. Gluttony. Greed. Sloth. Wrath.Envy. Pride. These, the Church teaches, are the sins that are poisonous, that will dull and eventually (if left unchecked and unconfessed) deaden our souls. While the list has been around since the 6th century, the sins themselves go back to the Garden of Eden, rooted in original sin. Fr. Stephen F. Torraco says this:

It is important to notice that five of the seven deadly sins latch onto a “part” or dimension of the soul called desire or eros, the home of the central emotion of love and the dimension of soul where we are usually “located” on a daily basis. In light of this fact, it is extremely easy to drift into sloth, envy, covetousness, gluttony, or lust.

We live in a world saturated by lust. That means we look at another human being merely as a sexual object. We are willing to, and we do, use others only for our sexual pleasure and nothing else. We forget that each and every person is made in God’s image and likeness and is therefore meant to be treated as both holy and wholly: a whole person, not merely there for our enticement and pleasure.

Have you ever seen an eating contest? Contestants seek to stuff down as many hot dogs or chicken wings or whatever within an allotted time. 50, 60, 70 hot dogs in mere minutes. While there is big money to be won at these events, it is sickening to watch so much food being consumed – not for the health of the body and enjoyment of the palate – but simply to consume huge amounts of food. Once we step over the line of health and enjoyment, we are headed to gluttony.

Oh, greed. Who hasn’t looked at another’s possession (a car, a watch, a house) and thought, “I NEED that. I HAVE to have that.” Who hasn’t gone shopping for one item at the mall and come home with fifteen? There is nothing wrong with working for something one desires, but when a person’s life begins to revolve around possessions, it’s greed.

Sloth. That’s that adorable little mammal that lies around in trees, right? Did you know that a sloth has fewer bones than any mammal? They move so slowly because they cannot move at any other speed! When we “stop moving,” when we stop getting our work done, when we neglect our duties, we have become slothful.

Wrath is anger on steroids. Righteous anger has its place (remember Jesus overturning the money changers tables in  the temple?) We should be angry about abortion, about prejudice, about abuse. It is when anger overcomes us and we become out of control, we seek revenge, that we are wrathful.

Envy is another sin that surrounds us, mostly because technology and social media allow us to peer into the lives of others that former generations could never imagine. We see celebrities who walk the red carpet every other day, it seems, dripping in jewels. Designer handbags costing thousands of dollars seem to be on the arm of half the moms at the PTA meeting. Our neighbor always has the latest model of that fancy sports car while we are stuck patching together the minivan year after year. Spending time wanting what others have, either things or their situations, is envy.

Pride can be a tough one to discern. We often have accomplishments of which we are proud: we finished a big work project and got kudos from the boss, or we finally managed to get a home project completed and it looks great.

Pride fools you into thinking that you’re the source of your own greatness.

Liking yourself isn’t sinful. In fact, it’s healthy and necessary, but when the self-perception no longer conforms to reality, and you begin to think that you’re more important than you actually are, the sin of pride is rearing its ugly head.

Pride is the key to all other sins, because after you believe that you’re more important than you actually are, you compensate for it when others don’t agree with your judgment. You rationalize your behavior and make excuses for lying, cheating, stealing, insulting, ignoring, and such, because no one understands you like you do. In your mind, you’re underestimated by the world.

Thankfully, our God is merciful and sins can be forgiven through the sacrament of reconciliation. However, we must work to prevent sinning in the first place. The virtues we cultivate in our lives help us do just that, and we will talk about those tomorrow.