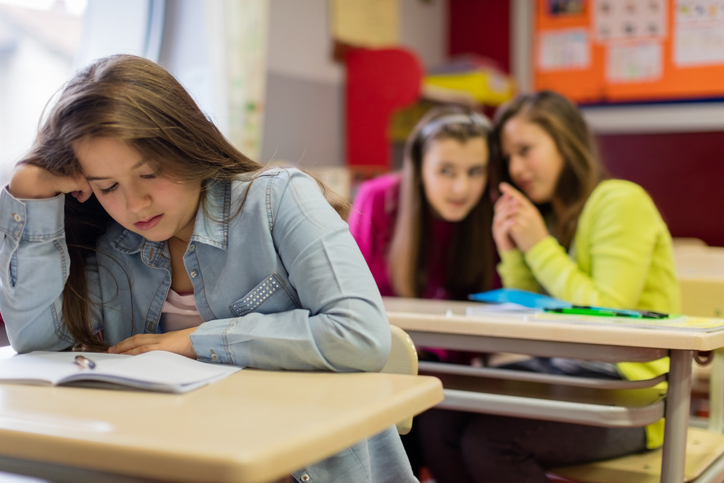 When I was in school—I went to a small Catholic girls’ school—I started writing. A lot. My reason for this burst of literary activity was revenge. I was most definitely not one of the cool girls, and as I stood in line for this or that and watched them (and watched them watching me, because they could only gauge their coolness when contrasting it with someone who wasn’t), I was determined to get even with them by someday publishing a novel à clef detailing how awful they’d been to me. A little like Chaucer threatening, “I will eviscerate you in fiction.” He carried through; I never did.

It was my literary ambitions that had put me there in the first place because they made me studious. I worked hard in school. I didn’t smoke in the girls’ room. The worst behavior I ever showed was in sliding down the banister in the great hall. So I was excluded.

It didn’t matter that it was me; as a person, I was irrelevant. If it hadn’t been me, it would have been somebody else. It just had to be somebody. For a group to feel exclusive, by definition, someone has to be excluded from it. There’s an “us” and a “not-us;” it’s how we all form group identities.

I didn’t look any different from the cool girls. I did act differently, though. I had clear goals and was determined to reach them. When I wasn’t studying or writing, I was out with my equestrian club getting blue ribbons at horse shows. I was driven to achieve. The cool girls didn’t see the point. Like me, they came from affluent backgrounds. They didn’t have to try as hard as everybody else. I showed the lie to their assumption of extra privilege, so I wasn’t one of them.

And I’d lie if I said it didn’t hurt.

I was thinking about that exclusion when I read today’s scripture passages, especially Matthew’s gospel. For all that we consider them saints today, Jesus’ disciples sometimes exhibited the worst of human behavior. Imagine the scene: they’ve taken their ministry on the road, traveled into Lebanon, when a woman from the area begs Jesus to cure her daughter. The disciples are brusque. “Send her away!” they say imperiously. It’s pretty much the same reaction they’d had earlier when Jesus proposed feeding a crowd of five thousand people. “Send them away,” was the disciples’ verdict; “feed them,” said Jesus instead.

We like that story. Jesus compassionate, Jesus making a miracle happen, Jesus using it as a teaching moment.

But this story strikes a discordant note, doesn’t it? Because Jesus says no. Not because she was a bad person, but because she wasn’t one of the group. Essentially he says, “I’m not here for you; I’m here for them.” And then he goes further still and, in a statement most of us find extremely uncomfortable, he compares her to a dog. She’s quick with her comeback—even dogs get scraps—but that doesn’t obviate his initial response to her, and neither does his subsequent healing of her daughter.

The problem with this passage is the light—or lack of light—it casts on Jesus. We want him to be fully human, but we don’t want him to be too human. It’s uncomfortable to see our own prejudices reflected in him.

Matthew doesn’t clean up this story or try to make it pretty. Matthew dares to give us a very human Jesus, and he paints a specific picture of this woman. She is called a Canaanite, which was an outdated and possibly derogatory term (by Jesus’ time, the people of the region were called Phoenicians, not Canaanites). Either way, she is not one of Jesus’ people. She is definitely on the “not us” side of the equation.

Yet she somehow knows about Jesus. She knows he has the power to heal. She knows he’s already fed a multitude of people. After all that, surely there has to be a little compassion left for her and her daughter! And, understanding what she’s asking, Jesus reverses course and heals the child.

This story shows Jesus enlarging his understanding of the people of God. He saw and heard a fuller revelation of God in the voice and the face of this foreign woman. She was not one of his people, but she was one of God’s people.

Jesus changed his attitude that day, and today’s reading challenges us to do the same. Every generation sees different people as “not-us,” as not part of that cool girls’ group at school. We need someone to not belong in order to assure ourselves that we do belong. And our insecurities at being not cool enough, along with our fear of anything or anyone different from us, make it critical that we continue to belong and continue to banish or refuse entry to others.

There are myriad people in the world from a metaphorical Tyre and Sidon. Different from us in race, customs, religion, gender. Who are today’s “Canaanites” who we feel can be treated as dogs? Are they Muslim? Women? Central Americans?

Jesus learned the importance of inclusion, of making sure everyone—not just his little band—had the opportunity to be part of God’s kingdom on earth. Is it really okay for us to do any less?

I don’t think any of those girls in school remembers my name, perhaps not even my existence. But I remember theirs, everyone. And how much what they did to me hurt.

With God’s help, I’ll never hurt anyone else like that. Not ever.