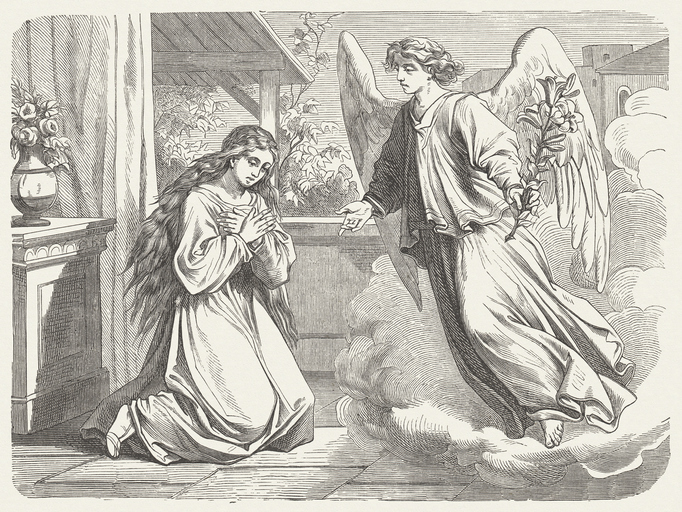 It seems the Feast of the Annunciation can often be underplayed. It has great drama, with the angel Gabriel’s announcement and Mary’s humble reply. Our thoughts may go to what we would do if we saw an angel, or would we maybe be a little proud if God chose us for such a task.

This is the day God becomes Man Incarnate. I imagine that from the time Eve was banished from the Garden, with every baby she nursed, she wondered, hoped, and prayed this would be the one to undo her sin. Is it Abel? Could it be Cain? How about Seth? But God was silent.

Through the long years, babies were born, but God was silent. We come to the story of Abraham. God promised a baby to Abraham, but again He delayed. When Isaac was finally born, God asked Abraham to give him up–to sacrifice him–incomprehensible to Abraham, but a picture of God’s love that would be shown to us. But when?

Isaac wasn’t the one, and the years marched on. Jacob, Joseph, Moses, David—all these furthered God’s plan but were not the one that Eve had longed for. The kingdom of Israel is divided, and more kings rise up, with prophets to call them back to God–even Elijah, who called down the Fire of God, is not the one. About 700 years before today’s gospel, the prophet Isaiah tells the wicked king Ahaz to ask for a sign. He will not, but God speaks and promises a virgin will be with child, and that child, her son, will be named ‘God is with us.’

The Jewish calendar numbers our year 1 A.D. as 3761 since the beginning of the world. Three thousand years since God promised he would rid the world of Eve and Adam’s sin, and restore us to his friendship. And Mary says, “Yes, I will.” No complaints about what took you so long, just yes–whatever you want, I want.

As I write, we’re a week into social isolation in the U.S. Seven days–days marked by fear, loneliness, anger, boredom–all of the things we usually experience, but without any distractions.

Masses are shut down, and Jesus seems far away. Two Sundays without the Sacrament and now not even daily Mass is allowed. How shall we survive?

Pope Emeritus Benedict XVI writes that perhaps fasting from the Eucharist could help us to deepen and renew our relationship with the Body of Christ:

Today too, I think, fasting from the Eucharist, really taken seriously and entered into, could be most meaningful on carefully considered occasions, such as days of penance…

“A fasting of this kind…could lead to a deepening of personal relationship with the Lord in the sacrament. It could also be an act of solidarity with all those who yearn for the sacrament but cannot receive it. It seems to me that the problem of the divorced and remarried, as well as that of intercommunion (e.g., in mixed marriages), would be far less acute against the background of voluntary spiritual fasting, which would visibly express the fact that we all need that ‘healing of love’ which the Lord performed in the ultimate loneliness of the Cross Naturally, I am not suggesting a return to a kind of Jansenism: fasting presupposes normal eating, both in spiritual and biological life. But from time to time we do need a medicine to stop us from falling into mere routine which lacks all spiritual dimension. Sometimes we need hunger, physical and spiritual hunger, if we are to come fresh to the Lord’s gifts and understand the suffering of our hungering brothers. Both spiritual and physical hunger can be a vehicle of love.”

May our fast from the Eucharist bring us closer to the joys of Easter!