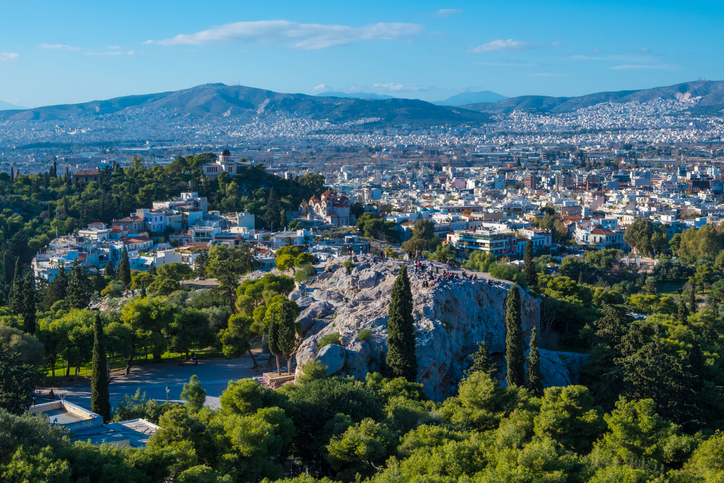 Today’s Mass readings start with St. Paul in Athens. The first verse sounds a bit like an installment in a serial novel… ‘after Paul’s escorts took him to Athens…’ What happened before this?

Paul had been in northern Greece and wasn’t too well received. In fact, Philippi is a city in northern Greece where, you may remember, he and Silas were imprisoned, and miraculously released in the night by an earthquake (a favorite story from my Sunday School days).

His friends thought Paul had better find somewhere else to preach, so he was taken to Athens. He arrives in the city and is distressed by the idols everywhere. Naturally, Paul wastes no time in telling the Athenians about Jesus–both at the synagogue and in the marketplace.

He makes his way to the Areopagus, the place where cases were tried and ideas debated. Upon seeing the altar to the ‘Unknown God’, he delivers his famous sermon.

In reading this passage, I was struck by a couple of things. First of all, Paul doesn’t tell the Athenians how wrong they were to worship their idols, and how foolish they were to believe these idols could control their lives. Instead, he tells them of God the Father’s love for them and his plan from creation throughout all of history to provide the means of repentance and redemption through Jesus. He doesn’t need to set up a ‘straw man’ that he then knocks down to prove God’s supremacy over their idols. The message is enough, and it is what they long for because it is the truth.

Secondly, he didn’t convince everyone. He did his best and left the results with God. This leads directly to the Gospel reading about the Spirit of Truth. God’s Spirit will work in the heart of every person in due course. It’s not our responsibility to determine when that is; it is our responsibility to tell them the Good News so the Spirit can work.

These last months of silence due to closed churches have been difficult to endure, much less understand. Perhaps we should see them as an opportunity to boldly proclaim the Good News. Our secular culture has increasingly embraced death during recent years, not just the literal death of abortion and euthanasia, but the spiritual death of calling good evil and evil good. There is no life in it, and those who live by it are desperate for deliverance and might not even know it.

We don’t need to know every nuance of other churches or religions, to explain why the culture of death isn’t working. We know the truth, and, as Paul says, ‘in Him we live, and move, and have our being.’