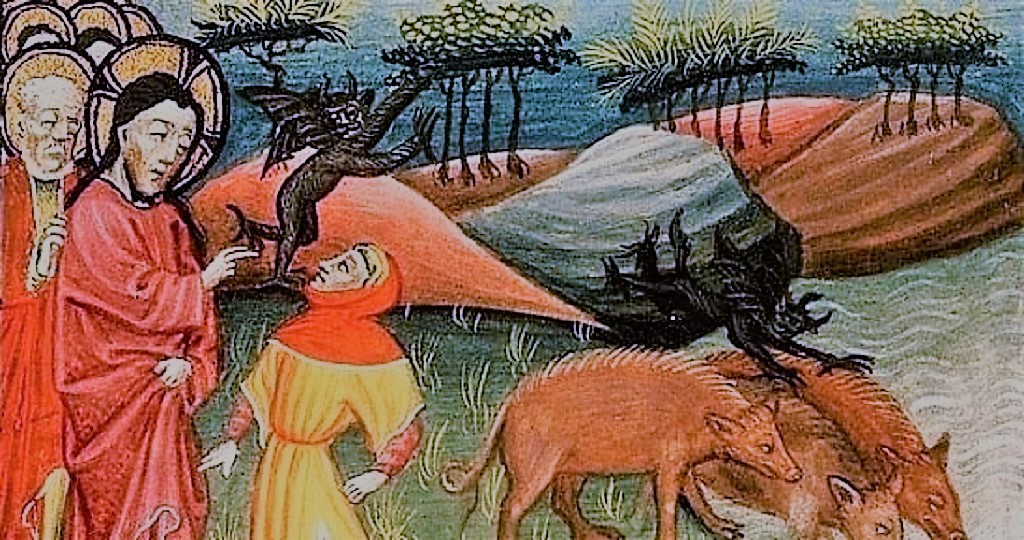 Today’s Gospel has two very distinct and frightening scenes (and if you don’t think they’re scary, go back and read them again!) In the first scene, Jesus and his disciples come across a man so out of control, the community can no longer help him. At the sight of Jesus, the man runs to him, and cries out (in a voice not his own). When Jesus asks his name, the demons inside the man reply, “Legion is my name. There are many of  us.”

The story then moves to the next scene; Jesus orders the demons out of the man and into a herd of pigs. The pigs then plunge to their death off a steep cliff.

Yikes. No wonder the Gospel says that the witnesses were filled with fear.

This past month, Catholic writer William Blatty died at the age of 89. Most people knew him by his book (later adapted into a movie), The Exorcist. The topic of both book and movie dealt with a 12 year-old girl possessed by a demon, and her mother who tries everything to help. Both book and movie were wildly popular at the time (early 1970s), and there remains much speculation as to how much of Blatty’s story is true and how much is fiction. In a 1998 interview, Blatty said he considered the book to be “apostolic” in nature, “one that could either strengthen one’s faith or lead one to it.” Blatty clearly never thought of himself as a writer of horror, but a writer who could use the subject of evil to examine critical faith questions.

Back in the Gospel reading, the man who’d had the demons cast out wanted to follow Jesus. Can you blame him? Life must have been a catastrophe: Unable to function, he was kept chained or made to stay away from everyone he knew. But Jesus doesn’t permit this. Instead, Jesus tells the man to go home to his family, and tell them what the Lord has done.

What are we to make of all this? Partly, as people of faith, we must always be aware of the presence of evil, and to take it seriously. The presence of evil is always an affront to God, who is all good. We should not toy with demons (which is why the Church forbids the use of “divination,” fortune telling, astrology and the like.) Blatty knew this; he treated the topic of possession and evil quite seriously; his was not a “clownish” or cartoonish treatment.

We are to be aware. We know that evil exists. We know people who struggle (like the man in the Gospel) with demons. We even say of addicts, “He is struggling with his own demons.” We see news reports of terrorists shooting innocent people or taking them hostage. Churches are looted and burned, priests killed, the faithful forced to flee. Truly, there is evil.

We should first follow the example of Blatty, and then of Christ. Blatty’s example was to be “apostolic;” that is, in the presence of evil, lead others to faith. Then we should aspire to Jesus’ instructions: Go home to your family and announce to them all that the Lord in his pity has done for you. (Mk 5:19) We are never to seek out evil, but our faith should be such that we can bear witness (to be apostolic) and to announce to all the Good News.