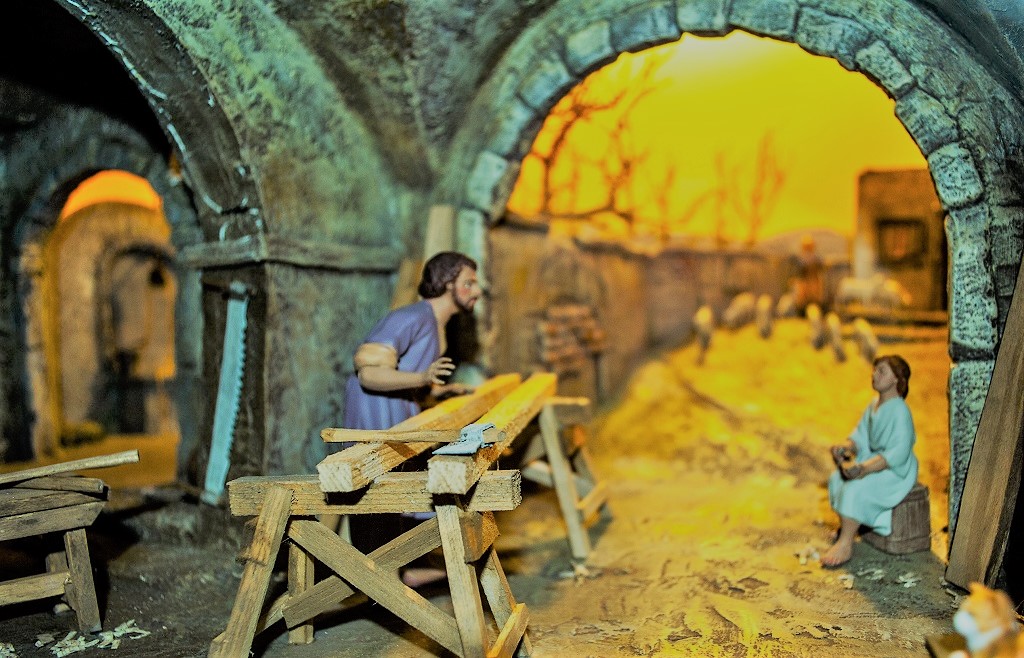 TODAY’S ADVENT REFLECTION FOR THE 3RD WEDNESDAY OF ADVENT, 2016

When my mother’s cousin, Mary, was twelve, she and her friend went to church every day after school during Lent to pray for the souls in Purgatory in front of the statue of St. Joseph. One day, in an excess of zeal, Mary decided that a kiss would encourage the saint to intercede more effectively. She had to stand on tiptoe to reach his lips, but she kissed him. As she let go, however, St. Joseph began to lean precipitously toward her. She called to her friend, but the church was empty. In a panic, she gently lowered the statue to the ground, and running to the rectory next door, rang for the housekeeper. “St. Joseph is on the ground,” she reported earnestly, ”and he needs help.”

Nearly every Catholic church in the world has an image of Joseph, son of Heli, somewhere near the altar. The beloved saint, a sincere and prudent man, who was the protector of Christ and Mary, belongs there because he was chosen by God to be the foster-father of Jesus, and because he is a model of genuine authority.

We know that Joseph exerted familial influence in ways that discharged legal, personal, and religious responsibility: he accompanied Mary to Bethlehem to register for the census as required by law (Matt. 2:4); he oversaw Christ’s birth (Luke 2:7), named him (Matt. 1:25), took Mary and the child to Egypt (Matt. 2:14), and brought them back to Israel (Matt. 2:21); he presented the child to be circumsized (Luke 2:22), and, when Jesus was twelve, brought his family on pilgrimage to Jerusalem for the religious feast of Passover (Luke 2:42). His fatherly care was shared by Mary, who said, “Your father and I have been looking for you,” and recognized by Jesus, who “lived under their authority” (Luke 2: 48-51). And it is certain, we are reminded by Pope John Paul II in Redemptoris Custos, that his professional direction as a master carpenter was honored in the house at Nazareth.

Joseph’s authority finds its prototype in the Trinity. God the Father holds authority for the three persons. We know this because Jesus refers to the Father on several occasions where we see him submitting his will: discovered in the temple, he says, “Did you not know that I must be in my Father’s house?” (Luke 2:49); in the garden of Gethsemane, he prays, “‘My Father, if it is possible, let this cup pass me by. Nevertheless, let it be as you, not I, would have it’” (Matt. 26:39); and appearing to the disciples in Galilee, he explains, “All authority in heaven and on the earth has been given to me” (Matt. 28:18). The authority that the Father shared with the Son is mirrored in the Holy Family and in the Church.

Like Joseph, head of the family, Peter was the head of the Church, an analogic reality recognized by Dante in Paradiso XXXII, when he placed al maggior padre di famiglia (136), “the greatest father of a family,” contr’ a Pietro (133), “opposite Peter.” Neither Joseph nor Peter ever affected grinding dominance, because authentic authority is not oppressive: it is open, loving, creative, and sacrificial, and like cousin Mary, knows that it “needs help.”

[Throughout the 2016 Advent season, we will be bringing you posts from a variety of writers. Our hope is that each of these will be a meaningful way for you to slow down, pray well, and prepare for the coming of our Lord. Today’s blogger is Sister Lucia Treanor, FSE, a Franciscan Sister of the Eucharist. She teaches writing at Grand Valley State University. She is the author of Symmetrical Patterning in Franciscan Writing of the Late Middle Ages (Mellen Press, 2011) and the editor of Broken Mary: A Journey of Hope (Beacon Press, 2016).]