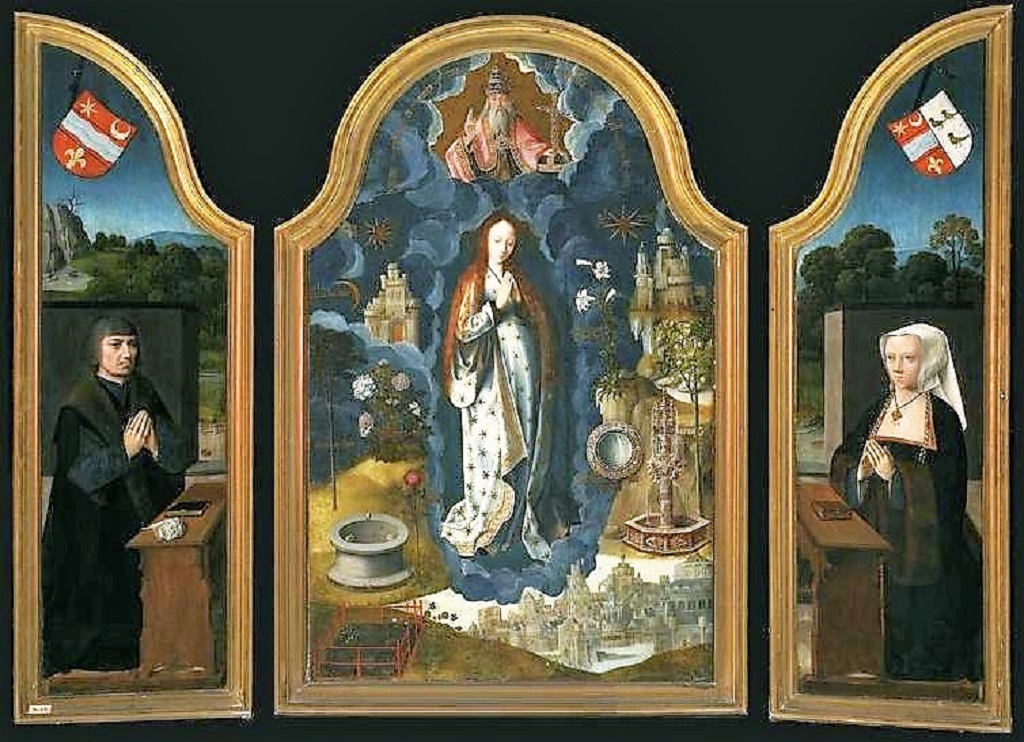 TODAY’S ADVENT REFLECTION FOR THE

SOLEMNITY OF THE IMMACULATE CONCEPTION, ADVENT 2016

A little history of this dogma and liturgical Feast Day in the Christian tradition might be in order. Pope Pious IX, in agreement with the Catholic Church’s first Ecumenical Council, made official a long-held belief that Mary, the mother of Jesus, was conceived in her mother’s womb without the effects of, or in any way presence of, sin or stain of sin. This belief had an up-and-down history of acceptance and rejection throughout its history. Some monasteries and dioceses chose to celebrate this devotion while others actually forbade it. There are writings in the early centuries of the Church which attempt to explain this mystery from various aspects. Is it based in Scripture? In our First Reading for today’s Eucharistic liturgy there are the familiar verses about God’s promise that there would be a blockage between a “woman” and the serpent or symbol of evil. The first woman, Eve, tasted sin, the second woman would not.

The Gospel for today is known as the Annunciation, and Mary, a woman, is greeted as “full of grace”. This phrase has been used also as a scriptural proof. I wonder if Gabriel had said, “Hail Sinless One from the moment of your soul’s entering your-bodily substance”, would it have made this mystery any easier for acceptance. Would Mary have understood any more clearly? We are dealing with biblical and not biographical history. We love sound-bite clarity which leads us to certainty and agreement. We are left with the same verbal response as Mary gave to Gabriel, “How can this be?” My question is “Why can this not be?”

There have to be doubts and questions and mysteries and fears in order to have faith, trust and love. It’s just the way of things. Virginal births, bodily assumption into heaven, being Mother of God, are strange and impossible according to our categories.

I was listening recently to a man who told me that he once was Catholic, but left that community, because of “Man-made beliefs.” I asked him which ones bothered him the most. He replied that the one about not eating hamburgers on Friday and the one about adoring Mary. He said he basically didn’t like dogmas of any kind. I knew that was going to be a short conversation; no sound-bites availing.

I am writing this the day before the national election here in the United States. There have been all kinds of dogmatic statements by all kinds of candidates which are taken as truth by those who want to take them so. Those who reject them as false do so with their facts and counter-statements. I am wondering how many voters change their choices because of stated facts or challenges. There must be ambiguity for the possibility of choice. Mary did not have a choice to be born or conceived without sin. She did not have a vote about being enrolled in the “first census” nor giving birth in a stable. She did not have an option about standing at the foot of the cross. She did have an opportunity to say “yes” to the mystery of her life. Her obedience, her listening, her eating of the angelic apple of invitation began the final project of God’s completing creation. The old Adam-and-Eve partnership is represented and refigured in the new Mary-and-Jesus duet. Adam hid himself in shame, because he knew himself to be naked. Jesus clothed Himself in shameless flesh which he had received from the shameless body and soul of His mother, Mary. Both sang the song of trust and grateful acceptance to the invitations to their facing the fears, doubts, and questions in their lives of immaculate receptions.

Today’s reflection was written by Fr. Larry Gillick, SJ, the director of Deglman Center for Ignatian Spirituality at Creighton University. Gillick says, “I enjoy sharing thoughts on the Daily Reflections.  It is a chance to share with a wide variety of people in the Christian community experiences of prayer and life which have been given to me.  It is a bit like being in more places than just here.  We actually get out there without having to pay airlines to do it.  The word of God is alive and well.”