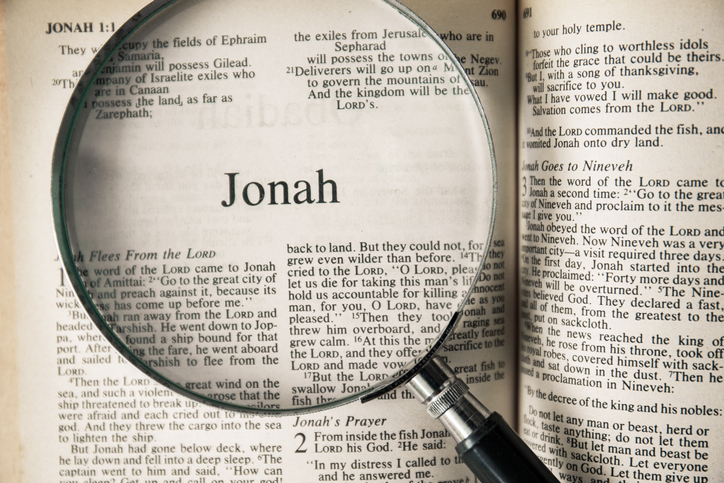 “Set out for the great city of Nineveh, and preach against it; their wickedness has come up before me.”

And so Jonah’s story begins with a crystal clear message from God about what he was to do next. No need for discernment, God spoke clearly. The message is in quotes, so we assume that God spoke directly, in words, straight from God’s mouth to Jonah’s ears. But is that really the way it happened? This story was handed down as verbal tradition for many generations before it was written down, and many more generations passed before it was codified and declared by the Church to be God’s inspired Word and included in what we now call the Bible.

Jonah’s story is true in the same way some of our favorite family stories are true. What happens when the family gathers, and someone tells about the time that old Uncle Joe attempted to fix the barn roof as the big storm came rolling in? Cousin Bart starts the story, but if he tries to embellish, Aunt Nancy, who used to listen to her dad tell the story every time a storm was coming, may shout out a correction. The story is true, and the retelling is kept honest by family members, but the exact quote of Uncle Joe telling the cow, “Don’t worry, I’ll save you!” may no longer be the exact words said at the moment but rather they convey the truth of what happened.

So it is with Jonah’s story. We read the story and assume God’s command came from God’s mouth to Jonah’s ear, and we wish we could hear God so clearly. Maybe, Jonah did hear a voice, but he didn’t believe the voice was God’s? Maybe Jonah thought he was cracking up because he was hearing voices? Maybe Jonah heard about the people of Nineveh, and the desire to go and teach them about God welled up in Jonah’s heart so strongly because that was God’s will, but Jonah didn’t understand, so he ran in the opposite direction? The story of Jonah leaves out Jonah’s process of discernment in determining how he knew that was what God wanted him to do with his life. How many times do we say, “If I just knew what God wanted me to do with my life, I’d do it? But I am just not sure. I wish God would speak to me more clearly.” And then, like Jonah, we head in the completely opposite direction.

What a beautiful comparison we are given in the Gospel reading! How did the Good Samaritan know that he was supposed to care for the man beside the road? The priest and the Levite, both men who were supposed to be in touch with God’s plan, walked right on past. How did the Samaritan, who wasn’t even one of God’s chosen people, know the right thing to do?

Is it possible, that sometimes, we get so worried about wanting to know God’s will for our lives that like the priest and the Levite in Jesus’s story, we forget to do the next right thing? The Samaritan saw a person in need and helped. How often do we see a person in need, and we make a quick, almost unconscious decision that that isn’t what we are supposed to be doing right now, so we hurry off to figure out God’s will for our lives? How often do we get swallowed up by a big distraction and it isn’t until we get hit upside the head and tossed upon the proper shore by “life” that we figure out what we were supposed to be doing all along? It isn’t flashy, new, and different, and it certainly is counter-cultural to the world around us, but what if we aren’t supposed to discern our whole life path right now? What if we are only supposed to live God’s love right now within the situation we are currently living.

When Jesus became incarnate, He changed everything. In Jesus, God’s invisible love became visible in the flesh, in the physical world. It is our mission, as priests prophets, and kings by virtue of our baptism, we are to spend our lives making God’s invisible love visible in this world. What would happen if we dedicated ourselves to taking time every day to slowing down for just a bit and really being in God’s presence? Would that change how we live the rest of our minutes? What if discernment isn’t so much about making huge decisions for the future as it is about taking the time in prayer, reading, reflection to recognize and do the next right thing? If we radically make God that much of a priority in our life each moment, so that when the next moment presents itself we are able to do the next right thing, doesn’t it seem like some of the big decisions would take care of themselves?

Mother Teresa said, “What can you do to promote world peace? Go home and love your family.” We won’t need to worry so much about hearing God’s voice in our ear, because we will already be living God’s love in our hearts.

The Gospel Acclamation sums it up; “I give you a new commandment: love one another as I have loved you.”

Wherever you are, may you live in God’s love today, with the courage and strength to do the next right thing. Amen. 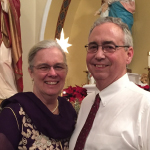