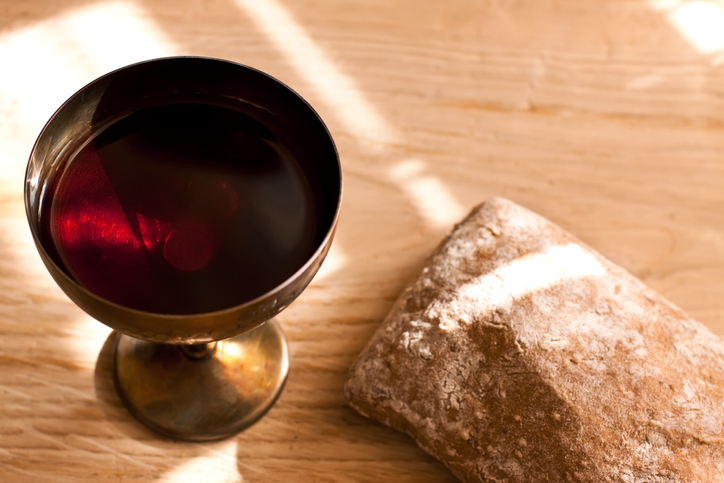 It’s odd, isn’t it, that you can read something many times, over many years, and miss the obvious. That’s how today’s Gospel appeared to me. Martha, Mary, and Lazarus had Jesus and his 12 over for dinner after Lazarus was raised from the dead.

How amazing to have dinner with Jesus, let alone with someone who had been dead. What did they talk about? Despite the tradition that Lazarus never smiled after he was restored to life, I imagine this dinner was a foretaste of the last banquet of the Lamb, where the redeemed will sit at table in the heavenly kingdom.

The Gospel continues with Mary’s act of love and devotion, anointing Jesus with oil. She pours out her love for him, over the objections of Judas, who thinks it too extravagant.

I always think that everyone in the New Testament who followed Jesus was so poor they barely had enough to eat, but here there’s a dinner thrown for 15 or more. I always picture the stories in scripture like those images from Sunday School where Jesus is on one side, and the crowd is across from him, listening to him, but with a definite divide between them. Not Mary– she’s kneeling at Jesus’ feet, massaging them with scented oil.

How could I have missed the story that was written? Probably because we hear God’s word, then file it away in our memory. Next time that passage comes up, it’s ‘oh yes, I know that story. Isn’t it …sweet or quaint or powerful–fill in the adjective.

But this year, as we begin the final days of Lent, and enter into the Triduum, all of the external busy-ness of life has been put on hold. The days have run together, making it hard to know which day this is, exactly. We have the gift of sitting with Jesus in this present moment and listen carefully to his love story. We can marvel at God’s mercy and experience his grace in a more intimate way. We long for the Sacrament of his Body but offer our act of Spiritual Communion until the time when we can receive him again.

The important thing is to know Jesus is with us, even as we engage in self-isolation and social distancing. We don’t live in the despair of the days between the Crucifixion and the resurrection. Jesus is with us now.

In the movie, Risen, a Roman officer, Clavius, is charged with finding the body of Jesus, which mysteriously disappeared from its guarded tomb. Pilate needs to produce the body to stop the rumors of resurrection. So he searches Jerusalem, coming to a house where he suspects Jesus’ followers are hiding. He breaks in, and finds the apostles joyfully gathered around a man–the man he is searching for. Jesus is engaged with them—looking, listening, smiling–fully present with them. Their fear of the Jewish authorities and the Romans doesn’t matter. Jesus is with them. As he is with us.

Although you have not seen him, you love him; and even though you do not see him now, you believe in him and rejoice with an indescribable and glorious joy… 1 Peter 1:8