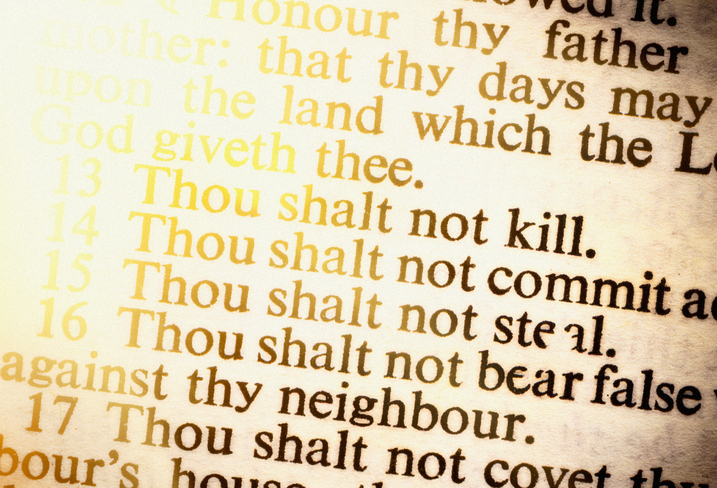 This Gospel challenges us, as Jesus challenges the Scribes and Pharisees. It can also be easily misinterpreted to mean that the Law is not important. But a true interpretation recognizes that all things – even very good things – must be balanced by LOVE and must lead to Love.

The first sin was committed against God because Adam and Eve doubted His love and goodness toward them. Later, as the human race continued to move away from God, Abram was called to follow God in faith, and his descendants were also called to trust and obey, which they did with varying success. By the time of Moses, they have become a “stiff-necked people,” so this possibility of serving God in free faith is diminished considerably. But God has not given up: through Moses, He makes a new covenant carved in stone with them, a covenant under the Law. It’s helpful to note that this Law was given to set them apart and ensure freedom from sin and hopelessness in this world; if God wanted slaves, He would have left them in Egypt! This Law developed over time until it covered every aspect of life, which connected each person throughout the day with the truth that they were a Chosen People, from whom the Messiah would come, and kept them “clean” for the Temple observances, set apart for God.

The Scribes protected the Law, interpreted and explained it, and the explanations took on the sense of hundreds of additional rules. The sect of the Pharisees distinguished themselves by strict observance of these rules in the minutest details.

These Pharisees have been hounding Jesus on his lack of observance of the Law, which they consider paramount. This is the danger with Law: wherever there are rules, there is a temptation to think that strictly observing them is holiness before God. The Pharisees have slipped into the error of believing that objective adherence to the rules is the most important thing; they have missed the point that external rules are intended to lead us to deep interior conversion and conforming to God’s will, growing in love.

So Jesus calls them out, not saying that the Pharisees should not have followed the Law and paid their tithes, but that they should have ALSO paid attention to “judgment and to love for God.” He points out that they love themselves and their own ideas and reputations, loving to be honored and recognized. This is not loving God, but using the Law as a way of glorifying themselves. They also use it as a weapon, which is proven by the fact that they seek to trap him, and eventually appeal to the Law to execute him: “We have a Law, and according to that law he must die!” (John 19:6-7).

Jesus calls all of us to obey God’s laws, but to obey out of LOVE and not forget to help others so that we become the saints we are called to be!

Kathryn is married to Robert, mother of seven, grandmother to two, and a lay Carmelite. She has worked as a teacher, headmistress, catechist, Pastoral Associate, and DRE, and also as a writer and voice talent for Holy Family Radio. Currently, she serves the Church as a writer and presenter, and by collaborating with the diocesan Office of Faith Formation, individual parishes, and Catholic ministries to lead others to encounter Christ and engage their faith. Learn more at www.kathryntherese.com or on Facebook @summapax.